The Mazda RX-8 RE Hydrogen Prototype 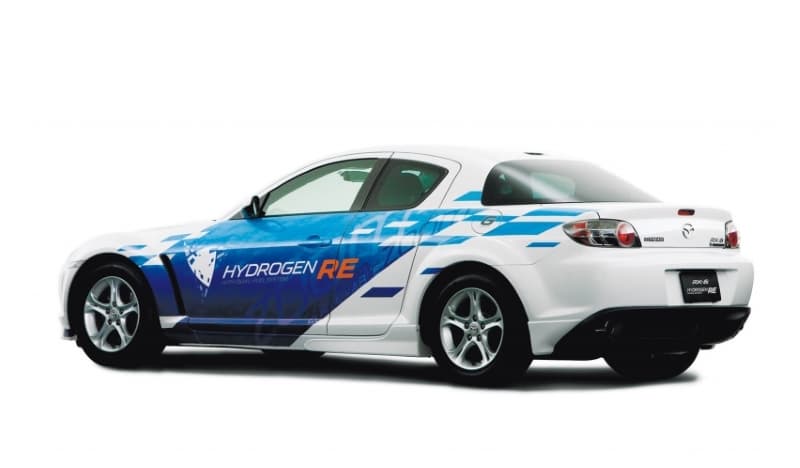 Why not consider a Mazda for your next sports car? With this Hydrogen prototype you're even considering the environment whilst you're driving - sort of. Helping you to achieve clean performance is a big step forward for the motoring industry.

The Mazda RX-8 Hydrogen RE is the first to produce a hydrogen rotary engine vehicle. Fuel consumption has been reduced without compromising on torque, acceleration and the exhaust note. Not only that, it has zero CO2 emission and nearly no NOX generation.

The RX-8 Hydrogen manages to achieve clean performance when you purchase a Mazda you will find the natural driving feel unique to the combustion engine. Since 2006, Japan has offered the RX-8 RE on lease to local governments and enterprises. In 2008, Mazda then began to join forces in the Norwegian hydrogen highway project: "HyNor".

The RX-8 RE is modified to run on hydrogen and petrol. The car burns hydrogen in its engine to provide the power, allowing the driver to switch between its hydrogen and petrol tanks. The car has a 60-mile range on a tank of H2, and should you reach this, the car will automatically switch to petrol. Although two completely different fuels, there’s only a slight drop in horsepower when running on hydrogen, not a significant difference to make a real difference.

Mazda isn’t interested in using hydrogen in fuel cells, generating electricity, but instead as the direct fuel for the combustion engine itself. Burning hydrogen doesn’t require the owner to accommodate lengthy charge-up periods as with the cell hybrids, or stick to a limited driving range. Being able to burn hydrogen in its existing rotary engines, the RX-8 RE can switch from hydrogen to petrol at any time, meaning a larger range being able to use whatever fuel is available.

Apart from the relatively modest driving range on hydrogen, there is another drawback. Hydrogen is not an energy source; it’s a means of storing energy, so at the moment it takes more energy to create a tank of hydrogen than can be retrieved back out of the petrol.

The biggest hurdle to running a hydrogen car is the lack of infrastructure available, mainly gas stations. But that could be said for most eco-concepts currently pushing the boundaries. At least Mazda’s hydrogen concept is a decent place to start.