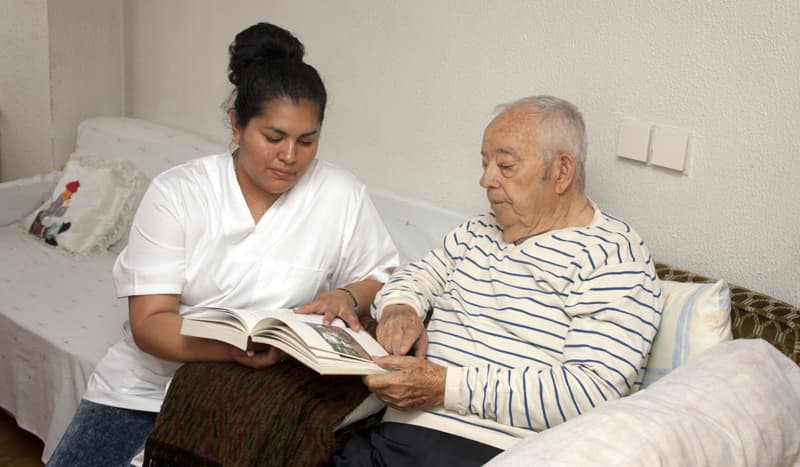 A nine month trial in 69 care homes in England has revealed that a 10 minute chat each day with someone suffering from dementia significantly improve the quality of their lives.

The research was led by the University of Exeter medical school and was published in PLOS Medicine involved more than 800 people with dementia in care homes in south London, North London and Buckinghamshire over a nine month period.

In the study people with dementia had a conversation with a care worker that was very personal to that patient, so it could be about their interests, life, or a particular memory. The key thing is that it was 1:1 and was very personal.

The findings were that there were improvements in the quality of life of those with dementia in the study and a reduction in agitated behaviour and neuropsychiatric symptoms. What also became apparent in the survey is that on most days a patient with dementia in a care home can receive only 2 minutes of social interaction each day. Many activities, which are often classified as social interaction, are group activities which may not engage an individual as well as a 1:1 interaction.

There is currently no cure for dementia so this research has been welcomed as a way of going forward to help people suffering from the disease.

Looking After Your Brain

A study published in the Lancet has listed nine key factors that contribute to the risk of dementia. From this research it has been estimated that 1 in 3 cases of dementia could be prevented if more people looked after their brain health. With 131 million people estimated to live with dementia by 2050 this research could help prevent cases of the disease.

The nine factors listed in order of importance are mid-life hearing loss, not finishing schooling, smoking, failing to seek help with depression, physical inactivity, social isolation, high blood pressure, obesity and type 2 diabetes. The evidence here is that brain changes begin to develop a lot sooner than dementia starts to show, so acting early could help prevent the disease taking hold. The key here is building up what is referred to as a brain reserve, keeping your brain active throughout your life.

It is now predicted that dementia will become the 21st century’s biggest killer. Yet changes we can all make to our lives could help with this. So the advice is to eat healthily, be active, stop smoking, keep socially connected to people and watch our weight. These small changes could make a huge difference.

Scientists in Japan and Australia have developed a blood test that detects the build-up of toxic proteins that are linked to Alzheimer’s. This clearly is an important way forward to developing a blood test for dementia. Alzheimer’s disease starts years before the patient has any obvious symptoms. So early detection, through a blood test, could help a patent make changes to their life which could keep brain cells as active as possible. The science behind this is that the toxic protein, which is called amyloid bet, builds up in the brain prior to symptoms being very noticeable. So by looking into the blood we can see what’s happening in the brain.